Tope Alabi is a Nigerian gospel singer, soundtrack composer and actress. She began her acting career right from secondary school, before she discovered her talent for singing.

Right now, Evangelist Tope Alabi has released 11 albums and made more than 1000 soundtracks and signature-tunes for Nollywood movies. Together with her husband, they established the Mardebra Comforter Foundation. 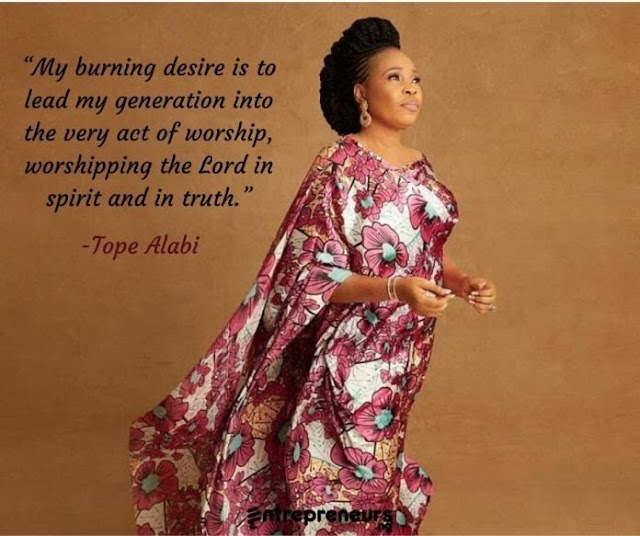 Tope Alabi Background
Patricia Temitope Alabi was born on 27th October, 1970 as the only daughter. She was born to Pa Joseph Akinyele and Madam Agnes Kehinde. Tope hails from Yewa, Imeko of ogun State, and she grew up in an environment with strict discipline from her mother.

She attended Oba Akinyele Memorial High School and obtained her West Africa School Certificate (WAEC) in 1986. Then, she proceeded to the Polytechnic Ibadan where she studied Mass Communication and graduated in 1990.

Tope Alabi Early Career
With the initial dream of becoming a star actress, Tope joined a theatre group in secondary school. She joined the Jesters International group in 1983 and was acting with Papilolo and Aderupoko. She also worked with Nigerian Television Authority (NTA), Ibadan between 1990 & 1991. Later, she worked with Centre-spread Advertising Limited, Lagos in 1991 – 1992.

Today, she is referred to as the pacesetter of soundtracks in Yoruba home video industry.

Personal Life
Tope is married to Soji Alabi who is also her manager and producer. They are blessed with children. Her hobbies also include; watching movies, watching table tennis, going on vacation e.t.c.

Music Career
Tope came to limelight in 2000 after releasing the debut album Oore ti O Common. This album brought her fame and also earned her the moniker Oore ti o Common and Agbo Jesu. Prior to that, she had released two albums – Ikoko Dudu and Baba Iwo la k’epe.

However, she did Oore ti o common (uncommon favour) first as a cover of a makossa hit before changing it to a gospel song in 2000. She also did some soundtracks such as Adake dajo, Angeli Mi and many more.

Tope has released eleven albums. The latest album, The Spirit of Light, 2019 was done in conjunction with the popular songwriter and photographer TY Bello. According to Tope, the album was not planned, the duo just wanted to worship God, but things turned around and it became an album. For instance, one of the tracks, Logan ti o de broke the internet within few hours of release.

The eleven albums include;

Also, they established the Mardebra Comforter Foundation, a subsidiary of the Gospel Vibes. Through the foundation, Tope and her husband cater for orphans and the less-privileged.

Award And Recognition
Some of her awards and recognition include; 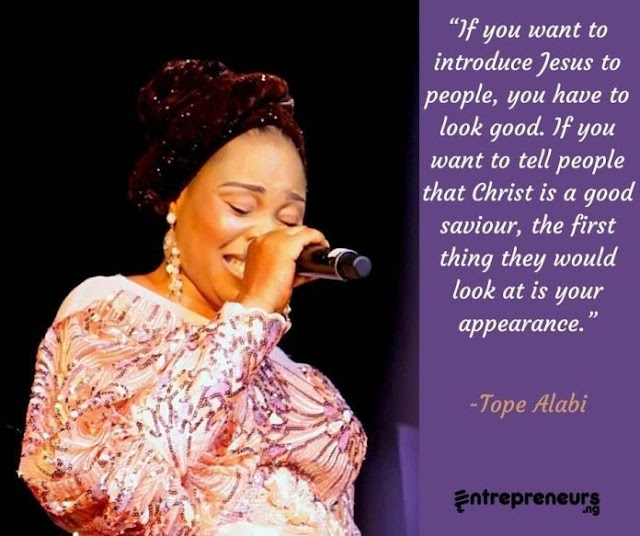 Tope Alabi Quotes
“My burning desire is to lead my generation into the very act of worship, worshipping the Lord in spirit and in truth.”

“Sometimes, it is necessary to have a taste of what it feels like to be an ordinary woman on the street.”

“When someone is not free to do what they feel like doing, like every other person on the street, it causes depression which can even lead to death.”

“Living a fake life can lead to indebtedness as some celebrities always want to meet up to a certain standard.”

“If you want to introduce Jesus to people, you have to look good. If you want to tell people that Christ is a good saviour, the first thing they would look at is your appearance.”

“There is a difference between what you like and what God wants you to do.”

“Everybody wants to win. But, there can only be one winner.”

“Gentle people may be stubborn but it usually helps us to achieve certain things.”

“Whenever God tells me to record an album, he always tells me how to go about it.”

Entrepreneurial Lessons From The Life Of Tope Alabi
Preparation

Before any performance, Tope ensures she adequately prepares. According to her, as a gospel minister, the duration of her prayer depends on what God dictates. “If he says I should pray for ten hours before a ministration, I would gladly heed his instruction.”

She would only perform after she must have prayerfully prepared.”

Sensitivity to one’s environment is one of Tope Alabi’s strengths. Overtime, she discovered the best time God talks to her is in her moment of quietness, or sometimes on stage during ministry. As a result, she never goes to relax without her pen and paper right beside her.

At some point, Tope was striving to be heard. While acting, she’d spend time on location and not appear in a single movie. When she began to sing too, she had released two albums which didn’t sell. But the moment she released Oore ti o Common, Tope shot to limelight.

Imagine if she gave up. Success does not just happen. Sometimes, you will face rejection and failure. Persevering and not giving up is all you need to wait it out.